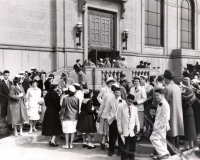 The buildings of St. Ann Parish, which were landmarked by the city of Cleveland Heights in 1975, became Communion of Saints Parish in 2010. This group of buildings, each one a different architectural style, includes the school, hall, rectory and church. Both the history of the parish and the styles of architecture contribute to the significance of these properties.

In 1915, the Diocese of Cleveland established a church in Cleveland Heights for about 40 families, and appointed Father John Powers to serve the community.

After finding a suitable location at the top of the streetcar line, Powers had a wooden church constructed at the corner of Cedar and Coventry roads. It was his goal to establish an elementary school, high school and college on the campus. Powers began his mission of constructing the elementary school immediately.

The oldest buildings on the campus, the rectory and recreation hall, were built in 1915 in a Georgian Revival style. The architects for the hall were Koehl & Van Renssalaer; the architect for the rectory is unknown.

The school, designed by George Hunt Ingraham, was constructed in 1925 in the Beaux-Arts style.

About this time, Powers began convincing the diocese that a new church building was needed. The church, while designed in 1925 by the firm of Walker & Weeks, with Horn & Rhinehart, did not begin construction until 1945, and was completed in 1952. The exterior is an ornate Neoclassical style, while the interior of the sanctuary is an interesting composition of many salvaged items, including marble paneling from the Manhattan Ritz-Carlton; marble columns, choir loft railing, chandeliers, and a clock from Cleveland’s First National Bank; bronze doors and altar steps from Central National Bank; and interior woodwork from one of the Daniel Hanna mansions.

Powers had a vision for the church sanctuary that he executed, despite input from the architects who may have had some alternate ideas about the design and incorporation of salvaged materials. Although his complete parish plan of incorporating a high school and college on the campus did not come to fruition, Father Powers achieved a great deal, faithfully serving the community for more than 50 years before retiring in 1966.

McNulty lives in the rectory at St. Ann and is well versed in the parish’s history. He has assembled a buildings and grounds committee to assist with maintenance and improvements, and committee members are educated on the landmark status of the buildings and proceed with historic design when making building decisions. McNulty believes that, although the process for design review can be slow when trying to start a project, the status does a lot of good for many buildings throughout the city. Communion of Saints is proud of its architecture and historic significance.

The author, Margaret Laan, is a member of the Cleveland Heights Landmark Commission, which preserves and protects buildings, works of art and other objects of historical or architectural value to the community. The commission's seven members are appointed to three-year terms by city council.