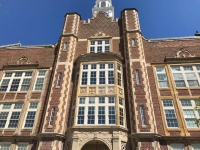 The new face of Heights High. See the smaller window on the fourth floor? That's between the vocal music rooms, where I spent most of my time in high school. The space is isolated from the rest of the school, as was I. [photo Len Gold]

There’s something strange about being in a room with 200 people and knowing exactly how old every one of them is. That’s how it is at a class reunion. Some of the people look 10 years younger than that age; some look 10 years older than you’d expect; most look approximately how you think they should at this age. And you? You look exactly the way you did in high school. Exactly. No—middle school.

Being at a class reunion is not like going back in time; it’s like stepping into the future. Because you haven’t changed at all, when you see everyone else, it’s sort of like you’re thinking, “Oh—that’s how they’re going to look when they grow up.”

I attended two of the three parts of my 50th-year Heights High class reunion in August. The first part took place on a Friday evening at Nighttown. There were 200 of us in Nighttown’s music room. You can’t actually fit 200 people in that room, even with most of the tables and chairs removed, but there we were. And, in a way, it was perfect, because that’s the way Heights High was in the late ‘60s. It was the pinnacle of the Baby Boom era and the school had twice as many kids (in three grades) than it does now (in four grades).

So being squeezed into that room, where the goal was to move around and talk to as many old friends as possible, was a lot like 3,000 kids trying to get to their next class, all at the same time, while carrying on conversations, sometimes with kids heading in the opposite direction. I think we all felt right at home in this situation at Nighttown.

I stopped to talk to, or was stopped by, many people I knew only slightly back then, but I was armed with one story about each of them. What I found funny this time was that even though I recounted the same stories to them at our last reunion, 10 years ago, and most of the people laughed and added some details to the story, this time several of them said things like, “Really? I did that?” and “Wow—I don’t remember that.” I'm thinking that for the next reunion, I’ll just completely make up stories about everyone. Apparently, they won’t know the difference by that point.

And, speaking of the people I knew only slightly back then, that was by far the largest group of people I knew in high school—people I knew only slightly. In a school of 3,000 kids, I had very few good friends. And I was two different people. I was the Heights Choir guy, who spent all of my high school time and energy working for and with the Choir. And I was the drugs guy, who spent most of my time outside of school with a bunch of people who hated school as much as I did, and we holed up taking a variety of drugs and playing music together.

I had a few close friends from each of those groups. A few of the Choir friends, and a few others who had been good friends of mine at Roosevelt Junior High, attended the reunion. It was great to talk to them. Most of the drug friends are dead or in prison or wandering the streets of various cities. Though a couple have, like me, survived and are doing fine, though, unlike me, would never consider attending a class reunion—and they shouldn’t.

I guess that’s why I attended only the Friday night part of the reunion and not the Saturday night gala—maybe it was the former Choir-me who went on Friday and the former drug-me who did something else on Saturday night.

In between those two events, on Saturday morning, many of us had the opportunity to get a tour of the renovated Heights High School, which is spectacular and an entirely new building inside. Watch for news of any public tours of the space and go see it.

At one point in the tour, our guide was explaining the new procedure for entering the building, part of which entails waiting to, as he said, “get buzzed,” to open the door. I turned to a former classmate and said, “I used to get buzzed before I got to school.”