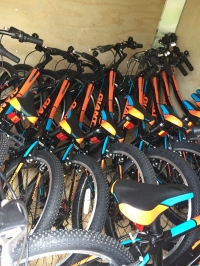 Safe Routes to School funds provided 24 bikes to be used for cycling skill and safety instruction in CH-UH elementary school physical education classes. The bikes are also used for school bike clubs and other cycling events.

These signs are a result of a collaboration between the city of Cleveland Heights, the Cleveland Heights-University Heights City School District, Heights Bicycle Coalition and others in the Safe Routes to School (SRTS) program. SRTS is a federal initiative to encourage walking and bicycling to school.

Other improvements include new sidewalk curb ramps and crosswalks at the schools listed above, and new bike racks at some schools.

Walkability is a strength of the Heights communities. We have sidewalks to schools, parks, shopping districts, arts and religious institutions. However, in the last 50 years, fewer families have encouraged their students to walk to school. In 1969, half of the students in the U.S. walked to school. Now, fewer than 15 percent of students walk or bike. One-quarter of school trips are made on a school bus, and more than half of all children arrive at school in private automobiles.

So why drive kids to school?

Parents consistently cite traffic danger as a reason why their children don't bicycle or walk to school.

The SRTS program addresses those concerns. In the Heights, that began in the fall of 2010 with a Walk or Bike to School Day, now celebrated in both fall and spring in the CH-UH district.

Cleveland Heights has been awarded more than $700,000 from SRTS. The grants paid for bike rodeos, crossing guard and safety patrol equipment, a bike fleet with 24 bicycles for children in grades four through eight, and bike helmets. The bikes will be used in physical education classes for cycling instruction, bike rodeos, after-school bike clubs and more.

Heights Bicycle Coalition formed in 2010 to make the Heights area more bicycle friendly. The group’s mission is to educate and encourage citizens to use bicycles as a sustainable and healthy form of transportation and recreation. Mary Dunbar, HBC president, wrote this column.