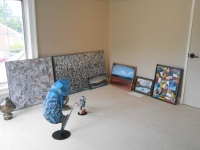 Some of the items in the "Song of Steel" exhibit at the Loft at Eastwood.

The Eastwood Furniture store has expanded its space, taking over the second floor of the building at 3451 Fairmount Blvd., and creating a pop-up shop and gallery called the Loft at Eastwood.

Eastwood’s owners, Ron and Angie Nandor, first explored the concept last fall, when Madelaine Mavec, a Cleveland Heights artist, displayed and sold her paintings above the furniture store. Mavec, who calls herself an experimental painter, will return to the loft this fall.

"We want to use the space to showcase local artists," said Ron Nandor. He added that the artists choose whether or not they want to sell any of their work while it is on display at Eastwood.

Nandor said he spent much of last summer cleaning up the space on the second floor, painting it and adding some lights. "It's a really bright space now," he said. Prior to opening the loft to local artisans, there had been nothing in that space.

In late May, the Nandors opened a new loft exhibit: Song of Steel. It features metal sculptures by Jerry Schmidt along with paintings by Matthew Merchant.

Nina Setrakian, another past exhibitor, will also return to Eastwood’s loft later this year. "Her family brings in various items from the Middle East,” said Nandor. The items in her exhibit included clothes and pottery.

Business arrangements between Eastwood and the exhibiting artists and artisans vary, as does the duration of the various exhibits and shops. For more information, potential exhibitors can contact either of the owners at 216-303-9862.

Eastwood Furniture opened at the corner of Fairmount Boulevard and Taylor Road in February 2016. All of its furniture is made in Ohio by Amish craftsmen.