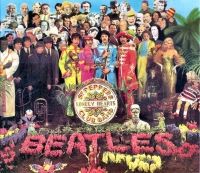 Two things happened on Friday, June 2, 1967, that made me really happy: The Beatles released their album Sgt. Pepper’s Lonely Hearts Club Band in America, and I quit high school.

I had been planning to quit school on the first day I was legally allowed to—May 21, my 18th birthday—but there were still a few Heights Choir events, like our spring concert, our album recording, and our annual dinner and awards night. And since the choir was the one and only reason I ever went to high school, I stayed enrolled to finish all of the choir activities.

I had been trying to quit school since the ninth grade. I often tried to reason with my parents, especially my father, that since I knew I was going to have a career in music, it would make more sense for me to get started on it, instead of wasting time in school. Looking back, more than 50 years later, I know I was actually correct about that.

They were years filled with stuff like this: One time, I really wanted to get out of one particular class, for some reason, and I asked my friend Tom Gallagher to write me a note excusing me from the class, because he had perfected the signature of one of the school’s guidance counselors, Virginia Bica. The note kind of worked. That is, I was allowed to leave the class, but the teacher turned the note in to the office staff, who showed it to Mrs. Bica for verification, and she, naturally, disavowed it.

The next day, my unit principal, John Farrinacci, called me into his office. I was no stranger to that office. I sat down and he said, “We’ve got you on a forgery rap.” I said, “Have you been watching 1940s crime movies?” He produced the note and flung it toward me, growling, “Whaddya have to say about this?”

I sat in the outer office for three full school days, not going to any classes. That was the punishment for someone who didn’t want to go to any classes.

That’s how I spent my high school years. One time, Mr. Farrinacci saw me in the front hall in between classes and yelled, “Hey, Budin. Can’t you afford a haircut?” Back then, a boy’s hair could not touch the back of his shirt collar or his ears. I shouted back, “No.” He yelled, “C’m’ere.” I went over to him and he handed me two dollars and said, “Don’t come back till you get a haircut.” I took the two dollars and went across the street to Wally’s Pool Hall, beneath the Cedar Lee Theatre, and spent the two dollars, brushed my hair so that it wasn’t touching my ears or collar and went back to school.

Mr. Farrinacci did the same thing with my friend Gallagher—told him not to come back till he got his hair cut. That was 50 years ago and Gallagher hasn’t been back yet. I have a feeling he’s not coming back.

So on Friday, June 2, I finally got out of there. I had been booked to perform at a folk club near Chautauqua, New York, for the first three weekends in June. I sang and played guitar, and my friend and Heights classmate Walton Mendelson accompanied me on flute and harmonica. The club, the Red Lyon, was owned by a Heights High English teacher named Tom Irish. That afternoon, I turned in my official quitting papers to the school office and the three of us piled into Mr. Irish’s sports car and drove to Chautauqua, listening to the just-released Sgt. Pepper’s album on the radio all the way there. Rock radio stations everywhere were just playing the whole album, over and over.

That day was, up to that point, the greatest day of my life.