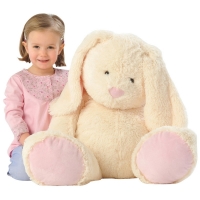 This is not my daughter. And it's not the Easter bunny that my daughter tried to win. It's not even my photo. I found it on ebay.com. But it is a cute little girl, and a giant Easter bunny. I mean, the last time I bought a new wallet, I just kept the pictures in it that came with it . . .

The April of when my daughter was 5, in 1992, we walked into our neighborhood supermarket, the Cedar-Fairmount Russo’s—or maybe it was Giant Eagle already, but I don’t think it was Dave’s yet—and her eyes immediately locked onto a giant stuffed Easter bunny that was sitting on a table near the entrance. She asked me why it was there. I explained that the store was holding a kids coloring contest for which the prize was that very toy, and that if she wanted to enter the contest, we’d pick up the form—a coloring-book-type line drawing of an Easter bunny—on our way out.

A couple of days later, we went back to the store and submitted her entry. I shopped at that store every two or three days back then, usually with my daughter. Starting the day we returned her entry, every time we arrived at the store and saw more and more of the contestants’ pictures on the walls, she became increasingly anxious and started telling me, every time, how much she hoped she’d win and how sad she would feel if she didn’t.

After the third or fourth time, I started telling her, every time, that she might not win. I expounded on all of the reasons she might not win, like: There are hundreds of entries, so that makes everyone’s chances smaller; and we don’t really know what the judges are looking for—maybe they don’t want an Easter Bunny that’s all black . . .And things like that.

After the 21st or 22nd time, in my exasperation, I finally told her she needed to stop doing that. I said, “Look—with so many entries, there’s a pretty good chance that you’re not going to be the winner, so one day, when we come in here and the winner has been announced, if it’s not you, I don’t want to hear about how sad you are. I really don’t want you to keep telling me how sad you are about not winning. Okay?” She reluctantly said yes.

The next time we went into the store, the giant bunny was gone. The name of the girl who had won it was posted on a big sign. I told her the winner’s name. While we did our shopping she was uncharacteristically quiet. We left the store and walked out into the parking lot. After a few steps, she stopped and said, “You know that little girl who won?” I said, “Yes?” tentatively. My daughter said, “I bet she’s really happy.”

She could always find a way to get around the law, to break the rules without having to pay a price for it. She followed the letter of the law and still got to impart her message to me.

But she also wanted to learn the rules, about something else, a few days later. It was the end of the day (for her) on Easter Sunday. She was getting ready for bed and sneaking a couple of jelly beans out of her Easter basket before I grabbed it to put it in another room. She got in bed and said, “You know . . . you’re going to have to tell me if the Easter Bunny—and Santa Claus and the Tooth Fairy—are real.” She’d been hearing rumors in school. I asked her why. She said, "Well, you're going to have to tell me before I grow up, so I'll know what to tell my kids."

I started to get choked up, realizing, again, how much there is to learn in life—a seemingly overwhelming amount—and knowing that she was just starting on this long, hard journey. But I knew it was also funny, so I made an effort to push my emotions in that direction. And, finally, I said, "Well . . . all I can tell you now is that when you stop believing, they stop coming." That was 24 years ago. She never brought it up again. I'm assuming she's figured it out by now. Or not. Either way is fine.