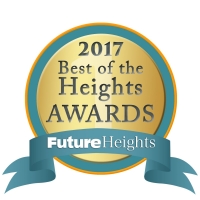 Each year when FutureHeights conducts its annual Best of the Heights Awards survey through the Heights Observer, the last question asks readers to suggest businesses that they would like to see open up shop in the Heights. Because it is an open-ended question, the responses vary widely. Some suggest specific businesses by name, others suggest an idea for a particular business district or location. Still others suggest ideas for activities that they would like to have access to in the Heights, whether they can be provided by a for-profit business or not.

In this year’s survey, readers suggested several new food-related businesses that they would like to see locate in the Heights. These include an old-fashioned soda fountain, an artisan ice cream shop, a bakery or dessert shop open until 10 p.m. or later on the weekends, a build-your-own-salad restaurant, a Cuban restaurant, a delicatessen, an independently owned donut shop, food trucks, a fromagerie (cheese shop), a gastropub, a gluten-free restaurant or bakery, a gourmet grocery, a health food store, a health/wellness/vegan/juice bar, a hot dog place,  an imported-/foreign-food grocery store, a juice/smoothie bar, a Korean fried chicken restaurant, a pizza-by-the-slice shop, a sandwich shop (nothing fancy, just good prices and portions), a place for sushi or tacos, a tapas bar, a taqueria, a vegan restaurant and a Vietnamese restaurant.

There are a few independently owned businesses from other communities that readers would like to see open a location in the Heights. They are Geiger's, Luxe, McAlister's Deli, Mitchell's Ice Cream and Bang Bang Pie (from Chicago).

Readers also had ideas for businesses that cater to the recreational needs of Heights residents, including those of families and young people. Suggestions included an arts center for young people; “art classes that are affordable;” a bowling alley; a children's birthday party location; a Cleveland museum (it was not specified if this would be a museum about Cleveland or if the Heights should attempt to recruit an existing Cleveland area museum to relocate here); a climbing gym; a college extension school; a dance club for the 40+ crowd; a family-friendly entertainment establishment; a horse-riding stable (the Severance estate stables, which still stand, are owned by the school district and used for storage); indoor activities, such as bounce houses and laser tag; an indoor playground; an indoor swimming pool; a kickboxing studio; a painting/pottery studio; a rock climbing venue; and a youth development center.

Although the Heights already has these types of businesses, readers said that they would like to see more of them locate here: auto parts stores; breakfast places, breweries, clothing stores, flower shops, gyms and fitness centers, house cleaning services, ice cream shops, Indian restaurants, and wine bars. They said they would like more late-night food options and more restaurant in general, especially those that are independently owned.