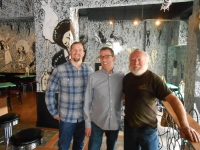 Barrio, a new restaurant, opened on Feb. 28 in the Cedar Fairmount district, in the space formerly occupied by longtime tenant the Mad Greek. The new restaurant is the fifth Barrio in Greater Cleveland, and the first to open on the East Side.

“Barrio means neighborhood in Spanish,” said Sean Fairbairn, co-owner of the chain, along with Tom Leneghan. “We thought this was a really nice neighborhood. There is good energy and good people. There is also parking in the back, behind the restaurant, and there are colleges nearby.”

Jake Hawley, director of operations, noted that Barrio often draws a younger demographic, and having both Case Western Reserve University and John Carroll University nearby was a big factor in the location’s selection. Fairbairn and his partner looked at about 100 locations before selecting Cedar Fairmount.

The company did extensive renovations before opening the restaurant. “Nothing had been done with this space for about 40 years, since the Mad Greek was first here,” said Fairbairn. Taking down several walls in the restaurant made the space more open. “We did not want to be in little boxed rooms,” Fairbairn added. “We really wanted to open the space up to give it more energy.”

As in the other Barrio restaurants, the walls are covered with a variety of images created by artist Michael McNamara.

The food menu features build-your-own tacos, as well as tacos designed by the restaurant’s chef, Pete Joyce. “You can make something different every day,” Fairbairn said. “It’s an interactive way of ordering, and it keeps people coming back.”

The four other Barrios are located in Tremont, Lakewood, the Gateway District in downtown Cleveland and at Progressive Field. The Tremont restaurant, the chain’s first, opened in 2012. The business also operates three food trucks.