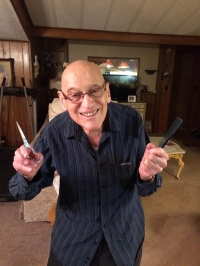 “The barber school thought I was 16 years old and I started training,” said Dominic Giammaria, 87, who retired this past Dec. 31 from cutting hair at his Dominic’s Barbershop at 1908 Lee Road.

He has 72 years of hair cutting experience. Just after he completed ninth grade at Observation School (now the location of the Cleveland High School of the Arts), and 14 years old, he pursued a certificate in Barber Science. After graduating from the old Cleveland Barber College in 1944, he started cutting hair with Joseph Marx in the Cedar-Taylor area. Giammaria's father Joseph died at age 51, when Dominic was about 20 years old—and was six years a barber.

Then his mother Josephine dated Charles Fanna, who was a barber entrepreneur with several shops around town. “Charles was like a father to me and gave me a few tips,” Giammaria said.

He is proclaimed by many customers to be the best barber they've ever had. He still practices for friends at his Chesterland home and declares himself an “artist that many barbers now are not.” His customers are, in a sense, “patrons.” In the lower-priced barbershop world, his cut, at $25, was patron priced. However, in the more-haughty hairdresser world, he could be considered a big bargain.

On many evenings, Giammaria made house calls to the homes of busy people. Cleveland Clinic president and CEO Delos ‘Toby’ Cosgrove is one of these, according to Giammaria, who said, “I take care of all the top heads.”

“Dominic started cutting my hair in 1960,” said artist Bill Hoose, 70, a resident of Cleveland Heights. Hoose was going to the previous barber in the Lee Road location when Dominic took over. “I don’t buy a newspaper,” he said. “I get all the news from Dominic.”

Giammaria's wife, Francis (maiden name Iorillo), died in 2002, after more than 50 years of marriage. They had two children. Giammaria now also has eight grandchildren, and eight great-grandchildren. He showed a visitor a photograph of his great-granddaughter Angelina-Marie, eight months old, and said, “I sing to her.”

A few of Giammaria's clients thought he was wasting his talents with haircutting. Danny Green, a notorious gangster, attempted to smooth-talk him into joining the mob. “You’d do better,” Green told Giammaria. But Giammaria consistently declined. “I’ll stay in barbering, the legal way,” he told Green. Green died when his car blew up in 1977. Recently, Giammaria summed up that situation: “He was killed and I’m still alive!”

Lee Batdorff has been a Cleveland Heights resident since 1966.