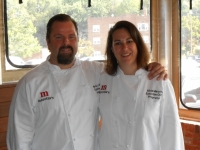 Alicia Marotta Linihan with her husband, Brian, in 2014. [photo by James Henke]

Alicia Marotta Linihan, co-owner of Marotta’s, the popular Lee Road restaurant, died on Dec. 5. She was 43 and the mother of four children: Maggie, 10; Libby, 9; Brendan, 7; and Mary, 5. A funeral mass was held on Dec. 9 at St. Dominic Church in Shaker Heights, and she was interred at Lake View Cemetery.

Marotta Linihan owned Marotta’s with her husband, Brian Linihan. The two met in the early 1990s, while working at Salvatore’s, in Cleveland’s Little Italy, and married in August of 2002. The couple traveled to Italy every year to work on their cooking skills.

The Linihans opened Marotta’s in the fall of 2000, naming the restaurant after Alicia’s father, who had died in 1999.

Marotta Linihan grew up in Cleveland Heights, and became interested in cooking at an early age. “All through grade school and high school, I would cook with my mother,” she said in an interview two years ago. “Italian food was a staple in our house when I was growing up. We’d always have big Sunday dinners, and all of the family would come over to eat. Everything was centered on food.”

Marotta Linihan graduated from Beaumont School and then attended Cuyahoga Community College, where she majored in culinary arts, business management and food science. After graduating, she went to Italy and studied cooking in Florence for a year.

Bridget Thibeault, co-owner of Luna Bakery and Café in the Cedar Fairmount district, had known Marotta Linihan since they were both in kindergarten. "We have always been good friends,” Thibeault said. “And we were both restaurant owners in Cleveland Heights.”

Thibeault and Marotta Linihan both had their first jobs at the old Russo’s grocery store, which was located in the Cedar Fairmount space currently occupied by Dave’s Supermarket. “We both worked in the produce department,” Thibeault recalled.

The cause of death was a heart attack. According to one of her friends, Marotta Linihan had no known heart issues, but did have high blood pressure.

Memorial contributions to St. Dominic School (www.stdominicschool.net), for the benefit of the Linihan children, are suggested.

Heights restaurant owners and other Heights business people, including Thibeault, Doug Katz and Kathy Blackman, are planning a fundraiser for Marotta Linihan’s family. Plans are still in the early stages, with the benefit—featuring an Italian dinner and music—scheduled to take place at Nighttown on Jan. 22. For more information and to purchase tickets, visit www.nighttowncleveland.com.