CLE Urban Winery to open on Lee Road in 2016 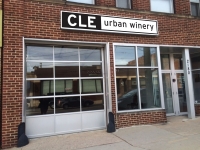 This Lee Road space will be the site of the new CLE Urban Winery.

A new winery is slated to open in May 2016 on Lee Road in Cleveland Heights. Called CLE Urban Winery, it will be one of the first federally bonded wineries in the Cleveland area to produce, serve and sell its own handcrafted wines exclusively.

When owner Destiny Burns turned 50 last year, she felt at a crossroads. “I decided it was time to come home to Cleveland,” she said.

She started looking for places where she could open her own winery. When she saw the space at 2180 Lee Road, she decided it was perfect and contacted the building’s owner. Studio You, a ceramic business, had occupied the space several years before. The space includes an area that had served as a garage.

Burns had heard about Dave Mazzone, who lives in the Fairmount neighborhood of Cleveland Heights. He had been a winemaker at various vineyards around the country. She got in touch with him and he loved her idea.

“When I learned of an urban winery coming to my hometown of Cleveland Heights, I felt compelled to make a contribution to the project,” said Mazzone. “The vision for the winery is one that emphasizes community outreach through wine accessibility, and a commitment to educate and enable all levels of wine enthusiasts. I look forward to interacting with all my fellow oenophiles in the Greater Cleveland area!”

Construction began in December. Burns, who also lives in Cleveland Heights, hopes to start producing wine this spring and have enough by May to have a soft opening. The grand opening should come in July.

CLE Urban Winery will have seating and tables in the front section. In addition to wine, Burns and Mazzone plan to offer cold plates with meat, cheese, bread and dips. The plans call for a tasting bar in the middle, and a bar against one of the sidewalls. The back wall will be the site of the winery and kitchen.

Burns spent 20 years in the Navy. She was a Russian linguist with a focus on cryptology. “I lived all over the world, in Japan, Hawaii and the Persian Gulf,” she said. She retired in 2003, as a lieutenant, and then lived in the Washington, D.C. area, working as a firefighter and emergency medical technician.

“I have great love and respect for first responders and for all those who serve our country and communities in uniform,” she said.

One of the winery’s walls will be devoted to honoring military veterans and fire, EMS and law-enforcement first responders, and will feature photos and unit patches. Those who serve in these capacities will receive a 10 percent discount.

While living in the D.C. area, Burns enjoyed going to vineyards and eating out at restaurants. “I spent a lot of time in vineyards,” she said. “I loved food and wine, and I always dreamed of having my own business.”

The winery plans to produce 20 to 30 varieties, ranging from dry reds to sweet fruit wines, and all of the wines will be named to celebrate and honor the Cleveland area. For example, the Chenin Blanc will be called Cleveland Heights Chenin Blanc.

Burns hopes to make the space available for parties, special events and fundraisers. “I view this as a philanthropic space,” she said. She also plans to offer game nights and cooking classes, and host book clubs.

In addition, customers will be able to come in and make their own batches of wine. “They can come in and produce 28 bottles and then come back four to six weeks later and label them with any name they want,” said Burns.

She also plans to offer a wine club, explaining, “There will be a reception every month and members can get one bottle and one growler (container) of wine every month.”

The wines will be produced from juices that Burns and Mazzone will source from all over the world, including Africa, Europe, Australia and California. “This is good wine made fun,” Burns said. “It’s not pretentious, and we won’t be aging the wines for two years.”

Burns said she thinks the winery will be a positive addition to the Cedar Lee neighborhood.