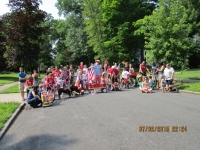 On the Fourth of July, my neighbors on Compton Road strengthened the connections that fuel commitment to the common good, and it was nearly effortless. It took just two phone calls, 15 minutes at the computer, a few text messages, two seventh-graders delivering flyers, two gallons of lemonade, and less than $20 for our street to come together to celebrate.

At 9:30 a.m., car traffic ended when the barricades delivered by the city (one of the phone calls) made the street the domain of bikes, dog walkers and strolling neighbors. Young people from the street and their friends gathered in the Dooners’ backyard (second phone call) to decorate bikes, strollers, wagons and dogs. At 10 a.m., parade grand marshal Pat Dooner led off on his 1948 fat-tire bicycle with Carole Dooner bringing up the rear, patriotic music blaring from her phone. Suddenly there was magic! Kids of all ages were parading down the street, streamers flying, as adults ambled behind with their dogs, and enthusiastic neighbors along the parade route stood at the curb to applaud them and make everyone feel special. After the parade, kids zoomed up and down the street while small groups gathered along the route to chat. By 11 a.m., car traffic had resumed and participants went on with their Saturdays.

A lot happened in less than two hours. New residents met their neighbors, elders like me got the thrill of seeing exuberant young people, and children enjoyed the bliss of owning the street. The parade created memories, communicated neighborhood interest in the lives of our children and added to the fabric of life on our street. It reinforced connections on our street that extend beyond those that exist within our separate houses.

Like it or not, we are interdependent. While it is easy to feel powerless, each individual made a big difference by coming together for our bike parade. It feels great to belong to a community, and it is comforting that neighbors can express their interest in others by joining a 15-minute parade! Through shared experiences we discover our commonality. We are no longer anonymous.

Failure to grow these bonds makes it easy to appeal to fear of the “other,” and to emphasize competition, privatization, getting what is mine, without worrying about the well-being of others. Simple activities that build appreciation for other people are the building blocks for making the common good a priority, but is it enough to reverse today’s emphasis on private interest over the common good? Public policies in many realms, including education, now push privatization. Civil society is shunned in favor of profits. It is terrifying.

In a recent blog post, my friend Jan Resseger quoted political philosopher Benjamin Barber’s critique of privatization: “It dissolves the bonds that tie us together. It puts us back in the state of nature where we possess a natural right to get whatever we can on our own, but at the same time lose any real ability to secure that to which we have a right. Private choices rest on individual power. Public choices rest on civic rights and common responsibilities and presume equal rights for all. With privatization, what we experience in the end is an environment in which the strong dominate the weak.”

Democracy becomes a sham when the powerful are the only citizens with rights. A Fourth of July parade that brings together a neighborhood in common affection and support for its children is a simple affirmation of our common civic bond and a powerful antidote to the narrative of private rights. I am glad to see a renewed interest in neighborhood organizing, part of the Cleveland Heights tradition that engages citizens in owning their community and solving its problems. It uses citizen connections and power to rekindle commitment to one another, the common good and the rights of all.

We need vigilant citizen engagement, practiced every day, to reinvigorate service of the common good as the driving purpose of public policy. It can’t end when the parade ends.