A dogged crime-fighting team at the CHPD 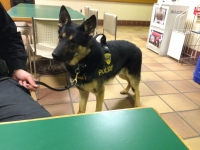 Jax, an 18-month-old German Shepherd, is the fourth dog to join the CHPD's K-9 unit. Photo by Bob Rosenbaum.

At the end of a long, 12-hour shift, the youngest member of the Cleveland Heights Police Department is ready to go home. To make the point, he quietly nudges his partner. When that doesn't do the trick, he begins to whine.

His partner, Officer Tom Harris, describes it as rookie behavior. But it's understandable; the rookie is only 18 months old. His name is Jax and he's a German Shepherd.

In November, when Jax joined the force, he became the fourth dog in CHPD's K-9 unit. Like his counterparts Argos, Rocky and Vinn, Jax's job is to track crime suspects, sniff out drugs and—after he's fully outgrown puppyhood—meet and greet Cleveland Heights residents at block parties and other public events.

Police dogs like Jax go through a vigorous training, first as puppies and then again upon being paired with their partners. Harris drove down to Wapakoneta, Ohio the day after his own son was born to meet Jax and begin training. Like others who have been through it, Harris said the dog selected him as a partner; and the sun-up to sun-down training regimen was more about breaking in the human than the dog.

Now that Jax and Harris are working together full time on the CHPD's "C" Platoon, they still train together on the second and fourth Wednesday of every month, along with K-9 teams from other area police agencies. The training time totals at least 16 hours a month—compared to the minimum four hours per year of continuing professional training that Ohio regulations require of police officers.

Jax had his first successful track just a few weeks into his regular duty. On a call for breaking-and-entering, he zeroed in on a scent just outside the home, and tracked down the suspect within minutes.

Harris has always loved dogs. He had wanted to be a K-9 officer since he was 17. He joined the Air Force with the thought of becoming a K-9 handler there, but a change in protocols at about the time he joined derailed that idea. He joined the CHPD in 2006, and remains on active reserve with the Air Force.

When offered the chance to become the city's fourth K-9 handler, he jumped at the chance.

Jax not only works with Harris; he lives with him at Harris' Cleveland Heights home. Harris also has an older German Shepard at home named Jasper, who is strictly civilian. The two dogs get along well.

At home, Jax is like any other dog, Harris said. But he likes to work. "He gets excited when he sees me getting ready for duty," Harris said.

Andrew Orie is a junior at John Carroll University, majoring in journalism with a minor in history.