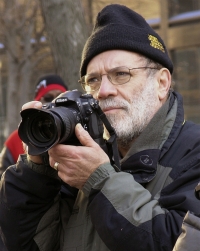 When Cleveland Heights photographer Steve Cagan says he is socially engaged, it doesn’t mean that he shoots weddings, nor does it mean that he is a documentary photographer. Cagan is an artist who is engaged in social issues—an activist photographer. He stands on the shoulders of sociologist Lewis Hine (1874-1940), who used photography to influence child labor laws, W. Eugene Smith (1918-1978), who turned an unflinching eye on war and disease, and the Worker Photography Movement of the 1920s and '30s.

Perhaps his current project with artist Mary Kelsey, “Gold Mining in El Chocó, Colombia,” explains best what it means to be a socially engaged photographer. In 2003, Cagan’s friend, activist Rev. Bob Begin, invited him to the first anniversary of a massacre in Colombia, promising that his spirits would soar in spite of the grim occasion. Cagan was uplifted by the resiliency of the survivors, who confronted tragedy and change through community organizing.

Returning to Colombia most years since, Cagan became aware of the ruinous activity of mechanized gold mining in El Chocó. He asked the community how he could help and, recently, with Kelsey, began to create artistic materials useful to their effort. Funded by a Kickstarter campaign, they have traveled there twice together. Residents have told him he is the only one who comes back.

It is vitally important to Cagan that his art practice is based on a relationship with a community and responsibility to that community. “It makes it important to get it right,” he said. “You’re talking about people’s lives.” A blog about the project can be found at http://elchocomining.tumblr.com/.

Cagan and his wife, Beth, native New Yorkers, came to Cleveland in 1970 to work for the New University Conference, a left-wing faculty organization he describes as “an adult SDS.” At the time, he was on an academic track to teach English and history, but he began working as an organizer while always looking for a way to be an activist photographer.

He worked with people to resist the factory closings that eliminated thousands of jobs in the 1970s, and to protest the Vietnam War. More recently, he has shined a light on issues such as housing discrimination and refugee families from Nepal. His goal: “To make an artistic contribution to movements that are trying to change things for the better.” He commuted to Rutgers University in New Jersey to teach photography for eight years, and taught the “difference between being part of social change as an artist versus using politics as grist for the mill of art.”

The roots of Cagan’s outlook on life lie with his left-leaning parents who “taught values, not political positions.” They taught him to be on the side of the poor, against racism, and for peace and democracy, and to express those values in what he did.

Another value his father passed on was appreciation for the natural environment. Although Cagan was brought up in the Bronx and Brooklyn, his father grew up fishing and hiking in Glens Falls, N.Y. Steve and Beth Cagan, who had both lived in New York apartments, had always enjoyed camping and hiking, and, in the 1990s, became more serious about birding, wildflowers and trees. Today, Cagan is an expert birder, and their Cleveland Heights garden has evolved from vegetable garden to perennial garden to a completely native habitat. When Cagan first proposed going native, Beth asked, “But will it be pretty?” Cagan would love to give a series of talks on native plantings with that question as the title.

“Mechanized Gold Mining vs. Rainforest Cultures in El Chocó, Colombia” will open Oct. 9 in the Campbell Gallery at Cleveland State University’s Maxine Goodman Levin College of Urban Affairs, at Euclid Avenue and East 18th Street. There will be an opening reception and illustrated talk by Cagan and Kelsey at 4 p.m. The exhibit will be on display through the end of the year.

“Bird Portraits” by Cagan will be on display at the Roger Tory Peterson Institute in Jamestown, N.Y., Nov. 14 through Jan. 4.