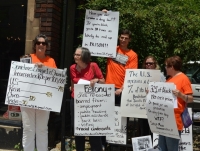 "Puncturing the Silence" with facts at the Larchmere Porchfest. [photo: Pamela Zoslov]

I am part of a new movement in Cleveland, Puncture the Silence-Stop Mass Incarceration. Inspired by Michelle Alexander’s book, The New Jim Crow, and the “Stop Stop and Frisk” movement in NYC, eight women sitting in a living room in Cleveland Heights last April unanimously endorsed the Stop Mass Incarceration Network’s (SMIN) call for a month of mass resistance to mass incarceration, police terror and the criminalization of generations this October. We set about helping to build a new social movement against all of the injustices in the criminal “justice” system, and received a very good response.

We had been appalled by the murders of Trayvon Martin and Jordan Davis, and the acquittal of George Zimmerman. Now, only four months later, we are outraged and deeply saddened by the police murders of Michael Brown and Eric Garner. Young black men live in fear for their lives. Their families agonize over their comings and goings. Young people want something to be done. Our movement shows that we all want police terror and all the injustices of the new Jim Crow to stop—now. We stand with the people of Ferguson, Mo., who are saying they want it to stop now, loud and clear.

The time is right for this movement. If we do not shout out now, the horrors will continue and likely get worse. Cleveland must join other cities in saying “No More!” in October.

We invite all those who want to join the effort to stop mass incarceration to come to our kick-off event at 6:30 p.m. on Thursday, Aug. 28 at the First Unitarian Church, 21600 Shaker Blvd. National activist Rev. Jerome McCorry, from Dayton, will be our featured speaker. At this meeting we will ramp up our organizing plans for the nationwide October Month of Resistance. Plans include publication of the SMIN Call in a major newspaper, sermons in houses of worship the first weekend of October, and demonstrations on Oct. 22 throughout the country (in Cleveland meet at 3 p.m. on Public Square), and a day of wearing orange on Oct. 30.

To our neighbors, please let us know you will be in the house on Aug. 28 by e-mailing puncturethesilenceCLE@gmail.com. For more information, visit www.meetup.com/Grtr-Cleveland-Stop-Mass-Incarceration-Puncture-the-Silence/.