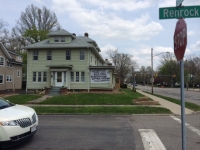 At its May 5 meeting, Cleveland Heights City Council voted 5-2 to confirm the variances granted by the CH Board of Zoning Appeals to Kertesz Enterprises, a developer from Orange Village, for a four-unit complex at the vacant lot at Cedar and Coventry roads. Council members Jeff Coryell and Melissa Yasinow voted against the measure.

At its May 14 meeting, scheduled to take place at 7 p.m. at CH City Hall, the city's planning commission will consider a conditional use permit for a planned residential development on the lot.

Neighborhood residents and others have expressed concern over the proposed development since it was announced in March. They point out that the size and mass of the building is out of scale with the property and detracts from the unique and historic character of the area. They are also concerned that allowing the extreme variances to the zoning code sets a precedent and encourages development of high-density housing in a traditional single-family neighborhood.

Residents have also voiced their outrage that the CH Planning Department did not engage or inform the community of the city's intent to develop multi-unit housing at this signature Cleveland Heights location. One neighbor expressed his opposition to CH City Council's decision by displaying a sign on his house which read, "We oppose City Hall threatening our historic neighborhood character."