Blues legend returns to the Heights 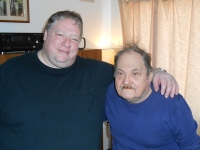 Musician Bill Miller, who recently moved back to Cleveland Heights, is better known to most people as Mr. Stress. Now 71 years old, and a member of the Cleveland Blues Hall of Fame, Miller has been a major figure on the Cleveland music scene since 1966, when he formed the Mr. Stress Blues Band.

As a member of that group, Miller played at virtually every major Cleveland rock venue, including the Agora, La Cave and the Euclid Tavern. The band released three albums, "Live at the Euclid Tavern," "Stress Formula" and "Killer Stress," and opened shows for such artists as Cream, Three Dog Night, Steppenwolf and the MC5. Singer/songwriter Chrissie Hynde even references Miller in the Pretenders’ song “Precious.”

Born on Jan. 1, 1943, Miller was the first baby born in Cleveland that year. “They ran my photo in the Plain Dealer,” he said.

He grew up in predominantly black neighborhoods in Cleveland, and became fascinated by jazz and blues as a result of hearing the music his neighbors would play on the radio and on their record players. He started out playing clarinet, but found it was a hard instrument to master. “Every time I touched it, it spoke,” recalled Miller. “It said, ‘Take your crummy hands off me!’”

In 1965, Miller heard the Paul Butterfield Blues Band’s first album, and decided to start playing harmonica. “That album practically made me cry,” he said. “I would sit in my room and play harmonica along to Dixieland jazz records.” The following year, he answered a musicians-wanted ad in the Plain Dealer and joined a band called the River Rats. The group played Dixieland in various Cleveland venues, including Fagan’s in the Flats. The following year, the group became the Mr. Stress Blues Band, and the rest, as they say, is history.

Miller has had more than his share of health issues. He had a heart attack when he was 51, and in 2001 he started losing his eyesight as a result of macular degeneration. Last December, as Miller was being interviewed by phone for a radio show, some listeners realized he wasn’t making sense and was slurring his words. One listener called 911, and emergency and paramedic crews went to his apartment, then on Madison Avenue in Lakewood.

“If someone hadn’t called 911,” Miller said. “I probably would have died.” In fact, Miller was having a stroke, and he was taken to Lakewood Hospital, where he remained for about five days, before being transferred to a nursing home in Lakewood. Meanwhile, it turned out that the owners of his Lakewood apartment had been trying to evict him. Miller had dropped a lit cigarette on the floor of his apartment and burned a hole in the carpet, and the owners wanted him out of the building. They were threatening to empty the apartment and place all of his possessions on the street.

Colin Dussault, who himself fronts a Cleveland blues band and whose family owns a moving company, heard about Miller’s plight through friends, and came to the older musician’s rescue. He brought a truck to Miller’s apartment and packed, moved and stored all of Miller’s belongings. A few weeks later, Miller was fully recovered from the stroke and given the green light to leave the nursing home. In the meantime, Dussault had managed to get him an apartment in the Musicians Towers apartment building on Lancashire Road, just off Coventry Road, and Miller moved in on Jan. 14.

Dussault then set up the Bill Miller Relief Fund and started getting the word out that Miller needed help. Donations began coming in, and Dussault then had another idea: he would create a CD to help raise money for his friend. Called "Stress Relief," the album is a four-disc set of songs by virtually every major Cleveland rock and blues artist, including Michael Stanley, Alex Bevan and Robert Lockwood Jr. (courtesy of his widow, Mary). It also features songs by such contemporary artists as Kristine Jackson, Hillbilly Idol, Cats on Holiday, Blue Lunch and many more. The CD is available at www.mrstress.net. Dussault is also planning a tribute concert sometime in the next few months.

Miller said he is happy to be back on the East Side. He and his first wife lived on Cadwell Avenue off Euclid Heights Boulevard many years ago, and he remembers hanging out on Coventry back in the 1960s and ‘70s. “I spent so much time over here that I can remember when Tommy [Fello, owner of Tommy’s Restaurant on Coventry] was working at a drug store,” Miller said. “And I went to his restaurant so much that they named a sandwich after me.” Indeed, Tommy’s menu includes the “Mr. Stress,” a BLT with peanut butter, mayonnaise and American cheese.