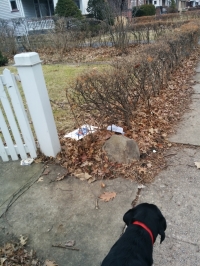 I recently sent the following letter to the CH Public Works Department, and I am sending a copy to the Observer as well, in the hopes that this issue doesn’t get lost.

I really appreciate the service and hard work that you folks do on a daily basis. However, I want to bring it to the city's attention that the method of refuse collection is perhaps not the most appropriate for taxpayers' needs. I've seen the trucks collect with the mechanical arm, and it's cool-looking. But because it prevents the use of covered garbage cans—which exposes thin or improperly tied bags to weather, animals and other messy factors—my otherwise gorgeous street is constantly covered in trash. That appearance, in turns, discourages others to take good care of the area. So, for instance, dog waste is just left on the tree lawns; why bother, since there's so much garbage anyway . . .

I took these photos within the span of less than three minutes on a walk down Hampshire Road (and I have more). These images were taken on Saturday—just about as far from trash pickup day as possible—which illustrates that left-behind trash after collection is rarely if ever addressed, either by the city or by those (primarily renters) who live on the block.

Cleveland Heights's property tax is one of the highest in the area, but I'm left feeling as though I could move down the street to much less expensive parts of Cleveland and see more neighborhood pride in appearance. I've spoken with others on the street, and many feel the way that I do. We want to use garbage cans, we want a clean environment. Otherwise, what's the point?

Thank you for your time and attention.