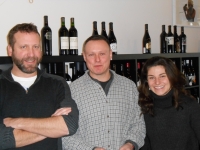 Ever since it opened back in December 2011, The Wine Spot, located on Lee Road between Silsby and Meadowbrook roads, has continued to evolve. The latest change involves live music. In January, The Wine Spot kicked off its new program with an appearance by the local band Meridian, featuring Max Stern and Jake Stern. The retail store/wine bar will continue to present live music on the last Friday of every month. The shows, which are free and open to the public, take place from 7–9 p.m.

“This is a really nice space for music,” said Adam Fleischer, owner of The Wine Spot. “I thought we could provide the best local music in a comfortable space, at no cost and in a family-friendly environment.” The opening show drew about 75 people, and Fleischer said, “They ranged in age from about 21 years old to 80 years old!”

The Wine Spot is collaborating with two local organizations—Cleveland Rocks: Past, Present and Future and ChamberFest Cleveland—to present the shows. Cleveland Rocks, founded by Cindy Barber, owner of the Beachland Ballroom, will assist Fleischer in presenting folk and rock acts.

ChamberFest, created by Franklin Cohen, principal clarinetist for the Cleveland Orchestra, will bring in musicians to play chamber music and other forms of classical music. Fleischer’s idea is to have the styles of music alternate every two months. For example, he will present two rock shows, followed by two classical shows. Coming up next, March 28 and April 25, are two events with music provided by Chamberfest Cleveland, featuring local jazz and chamber ensembles.

Fleischer grew up in Cleveland Heights and attended Wiley Middle School and Heights High. After high school, he enlisted in the U.S. Air Force and became a medic. Following his military service, he worked for various healthcare firms that deal with electronic medical records for about 20 years.

“When I had my IT job, I traveled a lot, and I saw a lot of different cities,” said Fleischer. “But I had young children, and I realized that if I was constantly on the road, I wouldn’t be there to see them grow up.” So he left the IT world and decided to open The Wine Spot. “I saw a lot of different things in the cities I went to, so I wanted to open something unique in Cleveland Heights,” he said.

When it opened, The Wine Spot was a bottle shop, selling retail wine and craft beer. Then, only a month after the store opened, ChamberFest’s Cohen stopped by the store. Cohen’s organization presents a series of chamber music events in and around Cleveland over the course of two weeks every June, and he suggested that one of the 2012 events take place at The Wine Spot. So that June, Fleischer presented a movie night, screening black-and-white Buster Keaton films, with piano accompaniment. About 200 people showed up for the event. The Wine Spot hosted a ChamberFest event again last June.

In addition to hosting music-related events, Fleischer has also been working with the Cleveland Institute of Art (CIA). Every two months, he presents an exhibit of works by CIA students, and he said that the art usually sells out. Fleischer also hosts wine tastings every Thursday night, from 6–8 p.m., and every Saturday night, from 5–7 p.m.

Last June, Fleischer got a full bar license. The Wine Spot now sells beer and wine by the glass, as well as drinks made with vodka, bourbon, tequila and mescal. Guests can also purchase cheese plates with dried meats and olives and local breads.

Fleischer, who still lives in Cleveland Heights, is delighted with the progress he has made with The Wine Spot, and has no regrets about leaving the IT world. “Cleveland Heights is a great location,” he said, “and I am very happy to be able to serve the city.” Despite all of the changes, Fleischer emphasized that the sale of retail wine and craft beer is still the store’s core business.

James Henke, a Cleveland Heights resident, was a writer and editor at Rolling Stone magazine for 15 years. He is the author of several books, including biographies of Jim Morrison, John Lennon and Bob Marley.