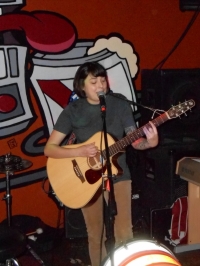 Leah Lou Tater performs at Mic-aroni, an anything-goes open-mic night at the B-Side on Coventry.

The B-Side Liquor Lounge and Arcade, the Coventry Road club located under the Grog Shop, has long been associated with the most current musical trends. In recent years it has primarily focused on presenting deejays, who offer up electronic dance music. However, this past July, the club introduced “Mic-aroni,” an open-mic night where almost anyone can perform. As a result, B-Side patrons can now hear a wide range of music styles and artists.

Mic-aroni is hosted by Leah Lou and the Two Left Shoes, a Cleveland music act that features Leah Lou Tater on vocals and guitar and Daniel Lee on bass. It was Tater who came up with the idea for the open-mic nights. “I read a book by Rev. Jen Miller called Elf Girl,” she said, “and in it she writes about these events that she put on in New York City called the Anti-Slam. It was basically an open-mic night where someone could do just about anything.”

One night, while in a bar, Tater thought she should do a similar kind of program in Cleveland and contacted the B-Side. Brad Petty, the club’s general manager, loved the idea, and Mic-aroni now takes place every Thursday at 8 p.m.

While many area clubs have open-mic nights, they are primarily for performers who can accompany themselves with an acoustic guitar or keyboard. At Mic-aroni, everyone is welcome, including poets, dancers, rappers, comedians and musicians of all styles. And, unlike most open mics, performers can be accompanied by Leah Lou and the Two Left Shoes, so they aren’t limited to being accompanied only by acoustic guitar. In addition, the club has also welcomed visual artists to exhibit and sell their work during shows.

“It brings in a very diverse crowd,” said Kassandra DeAngelis, the bar manager. “And it’s growing every week.”

Now a Cleveland Heights resident, Tater, 24, was born in Garfield Heights and grew up in Mayfield Heights. She got into music at a very young age, attending her first concert—Fleetwood Mac at what was then the Gund Arena—as a third-grader. She got her first guitar when she was in eighth grade and started writing songs as a senior at Mayfield High School. She teamed up with Lee in 2010, and they have released two albums, “This Music Belongs to You” in 2011 and “Dotty” in 2012. They are currently working on a new album and hope to release it by spring. In a recent issue of Scene magazine, Beachland Ballroom owner Cindy Barber said, “Leah Lou and the Two Left Shoes are ready to take off.”

As for Mic-aroni, Lee said, “I wanted it to be more of an interactive thing. I didn’t want it to be predictable. A lot of the music we play gets written on the spot. There’s an element of danger, but it’s really exciting. Every act is different and everyone participating is growing as an artist. They feed off the other artists. You have to be on your toes and be ready for any surprise. And this is art at its best—it’s happening right in front of you in real time.”