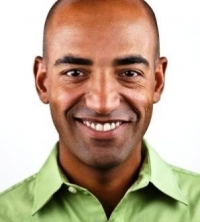 Cleveland Heights resident and Ashland University faculty member Fabio Polanco is the recipient of the university’s 2013 Taylor Excellence in Teaching Award. The award, first presented in 1997, was endowed by the late Edward and Louaine Taylor to support high quality teaching at the university.

Polanco, assistant professor of theatre, joined the faculty in 2007. “Fabio Polanco is someone who is indicative of the high quality of the faculty at Ashland University,” said Frank Pettigrew, university provost. “He is unique in that he is acting in shows all across Ohio, which then he translates back to his students in a real-world approach that helps them become more successful in the industry.”

After receiving the award on April 21, Polanco addressed the convocation on the topic “The Courage to Search, Accept and Give.”

“Nothing you could fabricate is ever going to be as interesting or valuable as who you are at your core, and your job as an artist, and as a person, is to have the courage to seek, acknowledge, free, accept and give, without shame, of your personal thoughts, feelings and values to others,” he said.

“You have to. Aside from being healthy, in the arts, and I might argue all fields, it’s a pragmatic necessity. It is what will separate you from someone who is technically masterful, but not truly present,” said Polanco, adding that it is scary to expose oneself in that way.

“It takes courage to search within yourself, accept what you find and give of it freely,” he said. “Luckily, most artists, as well as individuals in all disciplines and walks of life, have an innate desire to understand themselves and the world around them.”

For Polanco, September 11, 2001, was a turning point—a “stark reminder of the unpredictable and temporal reality of life.” He realized that, for his career, all he really wanted was to do quality work that he cared about with people he liked, and that he needn’t be in New York to do that; he could do it in Cleveland. So, after seven years in New York City, Polanco moved back to Northeast Ohio.

“Suddenly everything I was doing meant so much more, because I was not doing things to fulfill anyone else’s expectations, to fit some norm, but because I wanted to, because it mattered to me, because I had set myself on the path of searching myself, accepting myself and finally having the courage not to be ashamed of what was there and to give freely of what I found,” said Polanco.

The irony, he said, is that the minute he started on this new path, the quality of his work increased and his career prospered.

“Suddenly I became a much stronger actor, I was having fun through my work and that joy was reflected in its quality, and incredibly, my phone would not stop ringing, even New York came searching for me all the way in Cleveland,” he said.

As a teacher, Polanco said he works hard to find strategies that will help each student reach his or her goals, explaining, “I try to meet my students wherever they are on their journey and help them progress along the path that they have set."

Steve Hannan is the director of public relations for Ashland University.