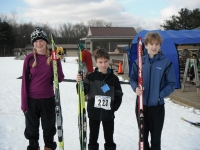 Gwen Wright (left) and Will Schneider (center) of Cleveland Heights, and Colin Wadsworth (right) of Avon Lake, are among Team Cleveland's five Nordic skiers going to the International Children's Games in Russia.

Two Cleveland Heights students are among ten from Northeast Ohio who will travel to Ufa, Russia, later this month as members of Team Cleveland, representing the United States in the sixth Winter International Children’s Games (ICG). Children from nearly 40 countries are expected to participate.

The remaining Northeast Ohio delegates are alpine skiers. Members of Team Clevealnd range in age from 12–15 and are sponsored in part by the Greater Cleveland Sports Commission.

The games run from Feb. 26 to March 2. Wright will ski in the girls 3.5 km Nordic classic and 3.5 km freestyle cross-country ski events. Schneider will ski in the boys 3.5 km classic and freestyle events. Both are members of the 4x3.5 km relay team. Both are also expected to participate in orienteering events—overland navigation on cross-country skis using a map and compass.

Wright and Schneider are members of the Hilltoppers XC ski club, which practices at various locations, including Brecksville Reservation, Springvale Country Club in North Olmsted and Holden Arboretum.

The goal of the ICG, an International Olympic Committee sanctioned event, is to promote peace and friendship among the world’s youth through a focus on sports. The first ICG event was held in Slovenia in 1968. Cleveland hosted the Summer ICG in 2004. Ufa, the capital of the Republic of Bashkortostan, is located approximately 700 miles east of Moscow.

Sponsorship of the event includes part of the cost for entry fees and travel. Remaining expenses are being covered through fundraising and contributions from the families of team members.

Bob Rosenbaum is a Cleveland Heights resident and member of the Observer's editorial committee.