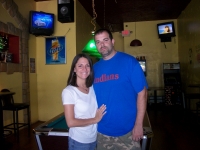 The Social Room on Lee Road is a place where people can mingle and have a great time without breaking the bank.

Jim Grenwis and his wife, Jennifer Babcox Grenwis, both Cleveland Heights High School graduates, bought the former Kobalt bar last March. “We kept the name Kobalt for a year and then we switched it,” Grenwis said. “We renamed it The Social Room because it’s the name of a room in the high school, so we decided to keep it close to home.”

The Social Room aims to offer an assortment of beverages at affordable prices. “We like to focus on our draft beer selection,” Babcox Grenwis said. “We’ve been able to double it in size since we bought the bar.”

In addition to its draft beer, customers also enjoy the bar’s patio and live music. Theme nights are popular at The Social Room, with open mic on Monday nights and karaoke on Wednesday nights. The bar hosts special events such as Halloween and New Year’s Eve parties. Perhaps the most unique event, the one-year anniversary party, featured the unveiling of the new name. Future events at The Social Room will include more live music and fundraisers.

“When our clients enjoy their time, we know we must be doing something right,” Babcox Grenwis said.

The couple doesn’t do a lot of advertising. Instead, they have a Facebook page with over 1,000 friends. “If we have local bands, they promote us and we drop off fliers all around town,” Grenwis said. “We also changed up the outside so it’s a little more obvious that there is a bar here.  Bands find us and we find them sometimes. Mostly they approach us and want to play.”

“I don’t think the economy impacted us that much,” Grenwis said. “We’ve been pretty steady, thankfully. The people and the bartenders are the best part [about our business]. Our bartenders are awesome, they help feed into the party. You never know what you’re going to get from each bartender. They each bring something positive and I’m very thankful for them.”

"It's been learning the ropes, meeting locals, and since we didn’t want to change anything that was already built, adding our own touch,” Babcox Grenwis said. “We tried to embrace the people who come here and enjoy it. We try to get new people in here and to come back and it’s been working.”

“We have a pretty relaxed, chill and laid-back atmosphere here,” said the owners. “Some people will always call it Kobalt, but call it whatever you want, just come in!”

Yelena Tischenko is a senior majoring in magazine journalism at Kent State University and a Heights Observer intern.