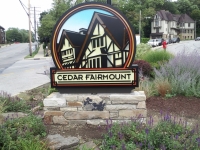 The Cedar Fairmount Special Improvement District (CFSID) unveiled a new sign in the traffic island where Cedar Road and Fairmount Boulevard meet. The sign, which had been a long time in the making, was unveiled just before the opening of the annual Discover Cedar Fairmount Festival on Aug. 12.

“The sign is the fourth phase of a project that began in 1999 when we completed a streetscape plan for the district,” said Kaye Lowe, executive director of CFSID. “In 2007, we hired Raymond Bugelski to create a logo for the district. We worked with Peggy Spaeth and Heights Arts to initiate a public arts project to mark the district as a unique destination.”

Bugelski designed a logo, incorporating the district’s English-style architecture, which is used on all the signage. The first phase consisted of signs to mark the entrance points to the commercial district. Next came street signs and overhead signs. The final phase is a large metal sign that sits on a stone base in the center of a landscaped traffic island. The sign is illuminated from within.

“Heights Arts is elated to finally have this place-making sign installed,” said Peggy Spaeth, executive director of Heights Arts. “It culminates our collaboration with CFSID to emphasize that Cedar Fairmount is not someplace to drive through on the way home, but that it is home to a unique neighborhood built up around a historic commercial district.” Heights Arts also worked with CFSID to install murals painted by local artist Jesse Rhinehart in 2004 and 2008 on the Heights Center Building.

CFSID, which has financed a large part of the construction costs, is continuing to raise money for the final phase of the project, which is estimated to be $20,000. “We don’t know what the final cost will be as we don’t have the electrical finalized yet,” said Lowe. “Citizens, businesses, property owners and neighbors have helped with the previous phases and we hope they will continue to be supportive.”

CFSID is holding a benefit to raise money for the sign and future streetscape projects. On Friday, Oct. 12, two-time Grammy award-winner Rita Coolidge will perform a special benefit concert at Nighttown. The event begins at 7 p.m. Tickets are $150 each, $60 of which is tax deductible, and include cocktails, gold circle seating and a silent auction. To purchase tickets, call Nighttown at 216-795-0550.

“There have been so many people who have worked to make this happen,” said Lowe. “Neighbor Jan Kious created the landscaping [for the island], and she and her husband, Gus, are the honorary chairs of the benefit.”