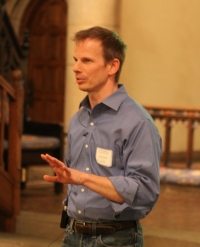 About 10 years ago, Harvey Garrett purchased a house near the vibrant Elmwood commercial district in Buffalo, New York. But it was on the wrong side of Richmond Avenue. Prices of homes on one side of the street sold for upwards of $200,000, while on his side some homes sold for $2,000.

Garrett decided that he needed to do something. What he and his neighbors did was the subject of his talk, “Reversing Disinvestment in Our Community,” at the FutureHeights annual meeting on March 20. Garrett described how, in 10 years, the West Side Community Collaborative (WSCC), an unofficial coalition of individuals and organizations, tripled home sale prices and created the fastest-growing real estate market in Buffalo.

Vince Reddy, a member of the FutureHeights Board of Directors, set the stage for Garrett’s talk by sharing recent census data. Several statistics, including a 42.6 percent drop in the median home sale price from 2006 to 2011, an increase in poverty levels, and an increase in the percentage of homes occupied by renters, show that Cleveland Heights, in particular, has been hit hard by the current economic recession and shows signs of significant disinvestment.

Board member Judi Miles added a personal side to the story when she described three houses on her street that have been vacant for more than three years. Miles said that neighbors have tried to maintain the properties by mowing lawns and parking cars in the driveways, but the houses continue to sit vacant, deteriorate and plummet in value. “What more can we do?” she asked.

Garrett’s talk provided some of the answers. “What was really holding our neighborhood back?” he asked. “It wasn’t the foreclosure crisis or some other uncontrollable market forces. It was the neighbors themselves.”

He found an attitude of self-created and perpetuated disempowerment, a culture of waiting for someone else to fix the problem, and intense anger that no one was coming to do it. “People had low expectations and a lack of appreciation for the neighborhood’s strengths and assets,” he said. “The cycle of disinvestment had created a blighted appearance, and a host of crime and quality of life issues became the norm.”

“So how could we reverse disinvestment?” asked Garrett. “We created a plan that was driven by ‘us’ rather than ‘them.’ Crime and blight were adversely affecting investment in properties, and perception is everything. So we had to abate crime and blight, block by block, in order to spark revitalization and attract private investment.

“Vacant properties were our assets. We had affordable housing and we needed to create more homeownership to stabilize the neighborhood. Valuing the historic character of our properties helped,” said Garrett.

WSCC worked from its area of strength, Richmond Avenue. In the first year, the group wiped out crime and blight in the first block. It boarded up and painted houses, planted flowers and mowed grass. The second year it moved to the next block, continually expanding its area of strength. WSCC followed up with investing in the housing stock on the previous blocks and working to increase home ownership.

WSCC reported successes as it went along. “We focused resources geographically and built collaborations,” said Garrett. “Small successes brought larger successes. Everyone wants to work with you—block clubs, the police, the district attorney, realtors—when you can make them look successful, rather than complaining or blaming them.”

“The lessons we learned were many,” said Garrett. “We learned to stop waiting for someone else to fix the problem. Blaming everyone else created immediate disempowerment to do anything. We started taking responsibility for everything—trees, sidewalks, vacant houses, corner stores, parks and schools.”