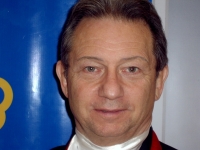 “Earning a first degree black belt from the World Kuk Sool Association takes four to five years of practice; becoming a master requires at least 25 years of training in the art,” said David Pritts. “There are fewer than 100 masters in the world right now,” he added, estimating that there are 1 million students practicing the art.

Kuk Sool Won is “a systematic study of all of the traditional fighting arts, which together make up the martial arts history of Korea. Kuk Sool Won seeks to integrate and explore the entire spectrum of established Asian fighting arts, body conditioning techniques, mental development and traditional weapons training,” as described at www.kuksoolwon.com.

“Learning Kuk Sool Won has enhanced the confidence of both my daughter and son. It has changed my family’s whole outlook,” said Pritts. “Without Kuk Sool Won, I definitely would not be where I am either, having lost over 30 pounds since joining the World Kuk Sool Association. I want other people to recognize the benefits of practicing Kuk Sool Won. We concentrate on improving inside and out, in every single way. That’s what martial arts did for my family.”