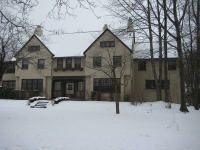 It would be hard to overstate the significant contribution that architects Harry E. Weeks and Frank R. Walker made to the beauty of Cleveland in the first half of the 20th century.

Walker and Weeks also left their imprint in Cleveland Heights, although one of their houses is now planned for demolition

Their architectural firm started in 1911, and in their earliest years they primarily designed homes for prominent local community leaders and business owners in a city that had become the sixth largest in the United States.

In those days, the streetcar lines carried people of all social classes to work and home, with only a few of the wealthiest people owning cars. Cleveland Heights offered a new clean-air place to live, up and away from the more sooty East Side that had once been the choice for Cleveland’s well-to-do, especially along Euclid Avenue.

In 1911, Walker & Weeks found early opportunities for commissions on exclusive Carlton Road at the crest of Cedar Glen, designing six of the first homes in the neighborhood. These homes represented an eclectic mix of European and American revival styles, following a popular trend that moved away from the more ornate Victorian predecessors on Euclid Avenue. Not far away, in what is now the Ambler Heights Historic District, they designed the distinctive 1911 James H. Foster residence on Devonshire Drive, in the style of the country arts and crafts homes popularized by English Architect C.F.A. Voysey. This is the house that soon be demolished by its new owners, who intend to build a much smaller, highly energy efficient house in its place.

By 1914, Walker and Weeks's success had earned them enough work that they were overseeing more than $4 million in construction. Other homes by Walker & Weeks, still standing in Cleveland Heights, include the G. Buckwell residence on Chestnut Hills Drive,  the F.W. Judd residence on Marlboro Road, the W.H. Prescott residence and the Armen Tashjian residence, both on Fairmount Boulevard, and the Max Hellman residence on Berkshire Road. Frank Walker is said to have especially enjoyed the close relationship that can develop between architects and home builders.

The combination of their design and business abilities eventually led Walker & Weeks to become one of the most prominent midwest architectural firms. By the mid-1920s, they had established a strong reputation as specialists in designing banks, churches and public buildings, with a preference for neo-classical styling. Even today, their legacy remains all around us.

Walker & Weeks residences represent a time when architect, builder and artisan worked as a team to build beautiful neighborhoods, one home at a time. Their work is an important part of the architectural form and fabric that has given Cleveland Heights its enduring special identity and is another reason why this place matters.

Chuck Miller is a principal at Doty & Miller Architects and serves as chair of the Cleveland Heights Landmarks Commission.