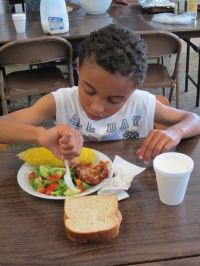 Nasir Shareet eating corn, salad and eggplant parmesan - all from the children's gardens. All photos by Joanne Westin.

Two summers ago, Audrey Miller of Noble Road Presbyterian Church and Tonya Butler, director of Discovery Preschool (located in the church) created a vegetable garden to involve the school-age kids attending the summer program at the preschool.

Miller recruited Karen Reinke, who does most of the gardening at the church, and Renke got Carolyn Sugiuchi and Joanne Westin to help. Later that summer, Westin called on Kathie Ellis, a fellow gardener and experienced elementary school teacher, for additional assistance. Supported by Discovery staff members, Rosemary Sanderfer, Annette Butts and Angela Outlaw, the first summer was fun and successful.

Sometimes, things were a little chaotic. Kids who were inside working on a craft project found their way outside for more gardening. Westin described it as "herding kittens."

The second year, the program added carrots, eggplant, and Brussells sprouts, and two additional vollunteers, Ann Curuoso and Margy Weinberg. The real difference, though, was the commitment to minimize the chaos of the year before. The first thing the kids did was to make large felt drawstring bags, to hold the supplies they would need for any activity. Each child was assigned to one of six teams, each with a specific shirt color. Each team had its own garden, in which the kids decided what to plant, did the harvesting, and prepared food.

Gardening sessions always began with an introductory lesson. Then, half the kids went inside, and half outside. Outside, one group might start with gardening, another with crafts, another with cleaning out the hummingbird feeders. Inside, the kids might listen to a story and then work on their journals, the class mural or another activity.

The groups switched after one hour. By the color of their T-shirts, the adults always knew where a child should be.

As for the young gardeners, they will quickly tell you what they think. Corn is the group favorite, followed closely by carrots, tomatoes and beets. Vegetables taste good and gardening is fun.