A community grows on Taylor Road 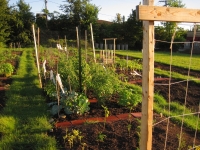 A new garden is growing near the intersection of Cedar and Taylor roads, where University Heights and Cleveland Heights meet. The Taylor Road Learning Garden represents the intersection of these two cities, and is evolving through the efforts of residents in both communities.

Cindy Oser is among the University Heights residents who came together last fall to organize a community garden on a long-vacant plot of land adjacent to the Taylor Academy building. “Mayor Infeld had talked about community gardens during her campaign, formed a volunteer planning committee, and it took off from there,” she recalled.

With the support of Infeld and the city, four rows of sod were cleared last spring, and gardeners planted the first plots in this still-expanding garden.

Meanwhile, Steve Warner, a teacher at Cleveland Heights High School, founded a student environmental club during the 2010-11 school year. “This is a grass-roots student movement that the administration supports,” said Warner. “The kids have an overwhelming number of ideas.”

Among their ideas for greening the community, and the district’s schools in particular, is to plant a rain garden at the former Taylor Academy. With that project still in the planning stages, Warner looked into getting the club involved with the UH community garden, and they were welcomed by the city.

“I can’t stress how great the city [UH] has been. There’s a strong partnership between the garden and the city, and now the school,” observed Warner. “There’s lots of teamwork, so if something needs to happen, it gets done. With 30 kids, we have a good work force.”

Oser and Warner cite Infeld as a key supporter of the garden. She even has a plot there herself, and Warner noted, “The garden gives the kids a chance to work side by side with the mayor of University Heights.”

This year, the school administration approved a one-period service-learning class, to include hands-on activities such as building the community garden. Warner says the class will reach across disciplines, and envisions garden planning and other green initiatives being developed in the class, and then implemented by the environmental club.

“I’ll be meeting with English and science teachers to develop the curriculum,“ Warner said. “It’s really made me excited about the coming school year. I've been with the school for 14 years, and am chomping at the bit to get started this fall. Even this summer, I meet with kids three days a week, to work on the garden or clear garbage from the site and the street.”

Just as the class curriculum will draw from diverse courses of study, members of the club represent a cross section of students. “They are all different, with different interests,” said Warner, “but in the club they all get along.”

Once gardening season ends this fall, Warner’s students will focus on planning the rain garden, and other future projects. As for the community gardeners, Oser said, “We had lots of brand new gardeners this year, so we’ll use the end of the season to recap and plan ahead. The focus this year was to get the gardeners going. Next year, we plan outreach to nearby businesses.”

Both Oser and Warner laud the garden’s community-building aspect. Oser noted, “I moved here in 2009, and I work from home, so it can be hard to meet people. I've met people through the garden.” She added, “I no longer have school-age children, so I like knowing what is happening in the schools. There is a connection, through the garden, between the school and the community.”

Warner observed, “There’s no way we could have done a community garden ourselves. We have certain resources, the city has certain resources, and it all came together. It’s been a very encouraging thing, to watch it grow, to develop out of nothing. As we proceed, we look forward to more of a bond between the students and the community.”

The Taylor Road Learning Garden is accepting applications for plots next year. A $20 plot fee for the season helps cover the cost of water. All levels of gardeners are welcome. For information, contact University Heights City Hall at 216-932-7800.

Kim Sergio Inglis is an avid gardener who, two years ago, went from a roof garden in Brooklyn, NY to a backyard garden in Cleveland Heights.