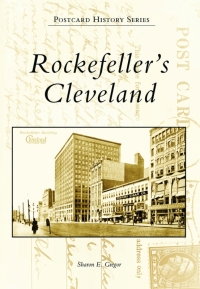 "Cleveland had a huge impact on Rockefeller’s success," said Sharon Gregor, an East Cleveland resident and author of two books about John D. Rockefeller. As part of the 10th annual Discover Cedar Fairmount Festival on August 7, Gregor will give a presentation about her research at 1:30 p.m. in the Alcazar’s music room.

Gregor says she began her research hoping to address the accuracy of the myths and legends that surround Rockefeller, the richest man in the world at the turn of the 19th century. "For example," she said, "many people believe that Rockefeller never returned to Cleveland after the 1914–15 tax dispute. In fact, he returned several times and frequently credited Cleveland for his success."

Her second book, Rockefeller’s Cleveland (2010, Arcadia of America, Postcard History series), gives a visual tour of Cleveland during Rockefeller’s time. Gregor dedicates two pages per topic and provides detailed descriptions in the captions, a treatment she hopes will enable readers to locate the historic sites in the present day.

For her presentation, Gregor will examine the myths and discuss little known stories about John D. Rockefeller, including a surprise visit he made to the Euclid Club’s National Amateur Golf Championship in 1907. The Euclid Club was located in Cleveland Heights, at the intersection of Cedar and Norfolk roads.

Gregor coordinated the effort that placed the 81 Rockefeller homes in Cleveland Heights and East Cleveland on the National Register of Historic Places. She is a founder of the Forest Hill Historic Preservation Society, served as its first president, and chaired the City of East Cleveland's historic preservation board.

Still working on documenting Rockefeller in Cleveland, Gregor said, "There is so much more out there." A third book is in the works.