Most speak against Oakwood rezoning at South Euclid public hearing

by Vince Reddy and David Brunner 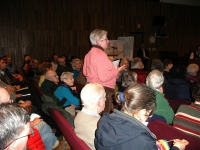 Approximately 150 people attended a public hearing of the South Euclid Planning Commission on March 10 to express opinions on the proposed rezoning of the former Oakwood Country Club from its present residential designation to one that would accommodate the big-box retail development proposed by Lyndhurst-based First Interstate Properties.

The commission is considering whether to recommend that City Council rezone the Oakwood property from its present R-75 designation, which permits residential uses and limited non-residential use, such as schools, libraries, museums and certain types of day care. The change to C-2 commercial designation would permit retail and other kinds of commercial development.

Besides the March 10 meeting, the commission had meetings scheduled on March 17 and 24 to address other issues related to the Oakwood proposal, including a conflict with the city’s comprehensive plan, which specifies only residential development at Oakwood. A rezoning vote by the Planning Commission is planned for April 14. Once the commission makes its recommendation, the final decision on the rezoning will be made by City Council. Information on the process can be found at www.cityofsoutheuclid.com.

More than half of the attendees at the March 10 meeting were Cleveland Heights residents, none of whom spoke in favor of the project. South Euclid residents were permitted to speak first. Of the 28 who did, half spoke against the rezoning and another four spoke against the plan as currently structured, according to Keith Benjamin, director of community services for South Euclid. Ten spoke in favor. Some South Euclid residents said they thought the rezoning should be put to a referendum, an option that South Euclid voters have exercised in the recent past.

Residents favoring the rezoning cited the lack of good shopping and restaurants in the area and a general dearth of development in South Euclid, a situation described by one rezoning proponent as “woeful.”

On the other side of the debate, opponents worried that the development would change the character of the neighborhood and attract crime. One speaker said she moved to South Euclid because of its residential quality and loved driving by the Oakwood green space.

The city’s numerous vacant residential properties were cited as indicative of low demand for housing, though First Interstate proposes housing as an accompaniment to the commercial development on the site; and the stalled redevelopment of South Euclid’s portion of the Cedar Center commercial district, a few blocks south of Oakwood, was brought up to question the need for additional retail square footage.

One South Euclidean called the proposed development “the easy solution” and said that citizen involvement was needed to come up with better ideas. It was pointed out that nothing had been done to improve existing commercial districts over the past 30 years, and that the proposed development could have a devastating effect on the locally owned businesses for which this part of Greater Cleveland is known.

Richard Wong, planning director for the City of Cleveland Heights, noted that South Euclid’s C-2 zoning designation requires only a 25-foot buffer zone and an eight-foot-tall wall between commercial development and surrounding residential neighborhoods. By comparison, he pointed out, Severance Town Center has a 100-foot buffer between it and residential districts along its east and south sides, and retail uses are not permitted in Severance outside of Severance Circle.

Cleveland Heights resident Fran Mentch, representing the Severance Neighborhood Organization, opined that developers are motivated only by money and that zoning laws and the ability to bring referendums to the ballot exist to protect citizens and to hold elected officials accountable.

Some residents called for the club’s property to be maintained as parkland, perhaps, suggested one, along the lines of Cleveland Heights’ beloved Cain Park. Another speaker stated that once the green space was gone, it would be gone forever.

The Oakwood Club, rumored to be on the verge of closing for years, was the subject of a citizen uprising in the 1990s, when plans for a proposed retail development there were eventually dropped. The club’s 144 acres lie partly in South Euclid and partly in Cleveland Heights but entirely in the Cleveland Heights-University Heights City School District.