Benefit raises $7,600 for Friends of the Cleveland Heights-University Heights Library 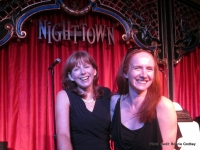 The event featured a cast of local celebrities, literary luminaries, and friends of the arts, each of whom read and brought to life a short poem or piece of prose. The readings were punctuated with musical numbers led by the Academy's music director, pianist Joe Hunter. Also assisting were members of the Friends of the CH-UH Library, who manned the silent auction, led by volunteer Adaora Schmiedl. Photos from the event can be viewed at http://bit.ly/NighttownWiseUp2010.

Bruce Hennes is the vice president for institutional advancement for the Nighttown Academy of Poetry & Letters.