Clustered parishes are a new way for church

by Cluster Planning and Coordination Team 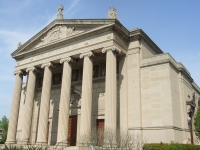 With the recent announcement of Catholic church closures and mergers splashed across the pages of local newspapers, we are all being forced to look forward to a new reality in our community. As members of the team of parishioners from Cleveland Heights and East Cleveland that submitted the recommendation to the Bishop, we have been in dialogue about these realities for more than a year and a half. These realties led us to recommend the creation of a single parish serving the area with two worship sites, one at Saint Ann in Cleveland Heights, and one at St. Philomena in East Cleveland.

This decision, however, is much more than a destination, it is a journey for all of us. On Sunday, March 22, Father Wally Hyclak led a prayer and reflection service for approximately 150 parishioners from the four parishes involved in the merger of the Cleveland Heights and East Cleveland cluster. This discussion centered on death, grieving, letting go and rising to a new and resurrected life. We came together, we prayed together, we may have shed a tear or two together, and we broke bread together.

We shared stories of the importance of the Church as we grew up, how we received our Sacraments, buried loved ones, the happy memories, the sad ones, all of what it means to be formed as Catholics in an area from North Park Boulevard to the railroad tracks, from Lake View Cemetery to Green Road. The tears we may have shed are the realization that, as much as we cherish these memories, we have to let go of them if we are to be reborn as a new and vibrant Catholic community in our neighborhood. If we are truly Catholic we have to think in a universal fashion, rather than parochially in isolated parish communities. We are challenged to utilize the formation and the gifts we were given to be a source of light to a neighborhood much different from the one where we grew up.

A common thread that weaves through all four parishes is the fact that the Catholic population has shrunk considerably and that portions of this area are home to pockets of extreme poverty and need. As we assembled to begin discussion of consolidation we remembered Jesus’ call to care for the poor and determined that there must be a Eucharistic presence in both cities. Our work has been a continuation of several efforts to bring about an effective Catholic Church, able to deal with the spiritual needs of its members as well as meet the needs of the poor.

Roughly 20 years ago Bishop Anthony Pilla began bringing communities together in his "Visions and Goals" initiative where parishes discussed ways they could work together. In 1993 the Diocese of Cleveland launched "The Church in the City" initiative, recognizing that many Catholics had moved from the central city leaving behind parishes that were ministering in increasingly impoverished neighborhoods with shrinking resources. The goal of this program was to link parishes in the suburbs with those in the city and to work together to build God’s kingdom in both areas. Following this the "Vibrant Parish Life" discussions began; thus, you can see this has been part of much longer journey.

Our cluster team began meeting in July 2007 and engaged in many monthly meetings. It examined the challenges and many options for moving forward. After much discernment, we arrived at a consensus that the best solution would be to form one parish with campuses at the present St. Ann and St. Philomena sites. The social justice and services to the poor currently being carried out at St. Louis and Christ the King parishes would continue from a base at the St. Philomena site, but also enhanced through the Saint Ann site. By making the best use of available facilities, this will provide expanded space for the St. Vincent de Paul neighborhood center where groceries and clothing are distributed to our sisters and brothers in need, as well as programs such as the Dorothy Day Community Supper.

The process of bringing together four parishes into one presents its own set of unique challenges, and many issues have yet to be discussed and resolved. With assistance from the Diocese, our cluster representatives and the leadership at the four parishes will be working together to sort through these various issues in the coming months. These matters include such things as the timeline for the formal process of merger, establishing shared governance of the new parish, parish naming and the creation of a shared identity, and the disposition of unused properties. Together, we believe we can navigate the challenges ahead to bring about a more vital Catholic community in these two cities. This message includes a call to action, a call to embrace our brothers and sisters in openness and hospitality, being willing to accept change in service of the greater goal.

We all have memories that formed us and shaped us but we cannot live in the past, we cannot bring back that former life. As a people who believes in resurrection and the new life that comes to us daily, we are committed to accepting the reality of today and to making the most of this new reality. By going through a grieving process, we can come to accept God’s challenge to take part in a new and vibrant faith community that is going from mourning, to the morning of a new day.