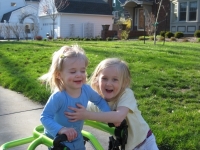 Parents will do anything for their children, and Andrew Koonce and Tania Younkin are no exception.

This August, the Cleveland Heights couple will compete in the Cleveland Triathlon in support of United Cerebral Palsy of Greater Cleveland as a tribute to their daughter, Elsie.

Married for seven years, the couple never dreamed they would complete a race like this together — but it is now common for neighbors to see them training, often with two kids in tow.

Tania, a former National Champion Collegiate swimmer, pushed Elsie across the finish line at last year’s triathlon as a part of Team UCP. This year Andrew will join them.

A Cleveland Heights native, Andrew played basketball and some team sports, but definitely did not aspire to be a triathlete! That changed when Elsie was born.

Elsie is two-and-a-half years old and has been diagnosed with cerebral palsy. The exact cause of her condition is unknown.

Cerebral palsy is not a disease; it is defined as a group of chronic conditions affecting body movement and muscle coordination resulting from damage to one or more specific areas of the brain before, during or shortly after birth.

Elsie’s case left her blind with optic nerve damage and limited coordination. When she began working with United Cerebral Palsy of Greater Cleveland in early 2008, Elsie was unable to hold her head up, sit, crawl or walk independently.

With the help of traditional physical and occupational therapy, as well as UCP’s intensive Steps to Independence® program, the future looks bright for Elsie.

She can now sit up on her own and crawl independently — in fact, you just might see her in the Heights cruising down the sidewalk in her walker, chasing after her five year old sister, Camryn.

Inspired by Elsie and her daily fight to stretch, move and hopefully one day to walk, Andrew and Tania are committed to complete the 23rd Annual Cleveland Triathlon in the North Coast Harbor area of Downtown Cleveland on August 2.

Tania will once again push Elsie in a stroller during the run portion, and after her race is complete, she will head back into the water as part of a relay with her family cheering her on.

Each contribution impacts programming for over 1,000 children and adults with disabilities throughout Northeast Ohio.

To support Elsie and her family’s efforts to raise funds or to learn more about Elsie, visit www.active.com/donate/teamucp09/taniayounkin.

You do not need to be a client family to be a part of the team.  For more information on Team UCP or the Cleveland Triathlon, contact blucas@ucpcleveland.org, call 216-791-8363, extension 227 or log on to www.pacificsportsllc.com/cleveland/athlete.html.

Participants should register under Team UCP.

Beth Lucas is the Director of Development at United Cerebral Palsy of Greater Cleveland and is a resident of University Heights.