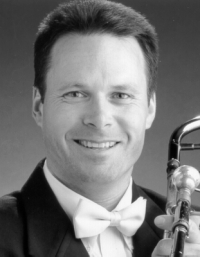 The Cleveland Orchestra notes with sadness the death of former Orchestra member Steven Witser, who died last week from a heart attack at his home in Pasadena. He was 48 years old.

A graduate of the Eastman School of Music, Witser was appointed to The Cleveland Orchestra in 1989 by Christoph von Dohnányi. He served as Assistant Principal Trombone (1989-2007), Assistant Orchestra Personnel Manager (1994-2007), and Acting Principal Trombone (2003-04 and 2005-07). He was also active in the Blossom Festival Band and Orchestra. While in Cleveland, Steve was a member of the faculty at the Cleveland Institute of Music. He performed in the Center City Brass Quintet, High Anxiety Bones, and Myriad. A California native, he became principal trombone of the Los Angeles Philharmonic in 2007.

Steve once said, “Music is something I would pursue, even if it were not my vocation. To be able to work at something I love, especially with The Cleveland Orchestra, is a gift.”

Please join friends and family of Steve Witser in a celebration of his life at a memorial service and concert at 4:00 p.m. on Monday, July 6, at the Church of the Saviour, 2537 Lee Road, in Cleveland Heights. Reception to follow in the Great Hall. For more information, call 216-231-7387.