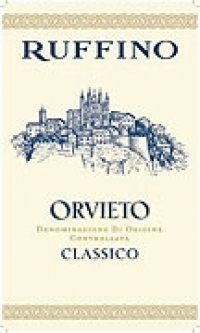 Good wine doesn't have to be expensive, and you don't have to go far to find it. In this tough economy, who doesn't want to indulge in an inexpensive luxury. Recently I found the following at my neighborhood grocer:

Orvieto is the name of a style of wine from the Italian province of Umbria. It is also the name of a medieval hilltop town between Florence and Rome. Wine has been made here for thousands of years. At one time, this was one of the most famous wines in all of Italy. Ruffino is one of the largest and oldest producers in Italy having celebrated their 130th anniversary in 2007. They have been making their Orvieto Classico wine since the 1950’s. It is a blend of the following grapes: Grechetto 50%, Procanico 30%, Verdello 10%, and Canaiolo Bianco 10%.

Ruffino’s Orvieto is light green/gold in color, clear and bright. It has clean citrusy scents. This is easy to drink. It has a refreshing lime essence and a slightly acidic character that makes it light and spry. While it is nice to drink on its own, don’t be afraid to match it with food too. This would be good with pasta primavera or risotto con calamari.

This slickly packaged wine comes from Catalyud in the region of Aragon in north central Spain. It is the project of leading Spanish importer Jorge Ordonez and the Gil family of Spain, famous for great values. The wine is made from gnarly Garnacha grape vines that are between 60 and 80 years old. This is a grape that is indigenous to Spain. It has spread around the world where it is called Grenache.

Garnacha de Fuego is an inky purple color in the glass turning magenta at the rim. It has scents of raspberries with a dusting of cocoa powder. This is smooth and easy to drink. The wine is produced without oak and is made to be drunk young. Yet, because these grapes came from older vines; the wine has a layered complexity that makes its low price surprising. It has flavors of raspberries with some tart cherries especially on the finish. An almost, but not quite, candied aspect to this wine makes it great for sipping alone. This is not a heavy wine and would pair well with chicken or perhaps vegetable lasagna. This is another example of the incredible quality value priced wines that has made Spain the hottest wine producing region on the planet!

Both of these wines were purchased at Zagara’s on Lee Road and each cost $8.99.

Loren Sonkin is an attorney in private practice and dreams of traveling the world visiting wineries. He lives and works in Cleveland Heights and is a regular contributor to www.IntoWine.com.