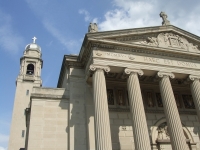 On April 30th, teams of volunteers from four area Catholic churches simultaneously presented the first draft of a plan to merge their congregations. Parishioners from Saint Ann and Saint Louis of Cleveland Heights and Christ the King and Saint Philomena of East Cleveland gathered at their respective churches to hear the report. Those at Saint Ann were generally receptive to the recommendation that all four churches combine to form one parish. The parish would have two campuses, one at Saint Ann and the other at Saint Philomena. Saint Louis and Christ the King would close and the number of priests currently serving the four parishes would be reduced from four to two.

The Catholic Church in Cleveland and its nearby suburbs has been losing members to the growing, and sometimes new, parishes in farther-flung suburbs and cities as many Cuyahoga County residents have migrated to these outer-ring cities and the counties beyond. Left behind are many proud congregations who struggle with aging infrastructure and stagnant, often declining, financial support. The number of priests serving the diocese continues to decline and their median age continues to rise.

About two years ago, the Most Rev. Richard Lennon, head of the diocese of Cleveland, announced a plan to address the issue. The diocese’s 231 parishes were to self-select into 69 clusters. Once the clusters were approved by the bishop, each was given a mandate that indicated the number of churches, the number of schools, and the number of priests that should serve each cluster, beginning in 2010. Bishop Lennon had implemented a similar process when he headed the archdiocese of Boston.

The two Cleveland Heights parishes, Saint Ann (at the corner of Cedar and Coventry) and Saint Louis (on Taylor, between Mayfield and Monticello), formed a cluster with East Cleveland parishes Christ the King (on Noble Road, south of Euclid) and Saint Philomena (on Euclid, east of Eddy Road). For the past eleven months, a dedicated cluster planning team, consisting of five volunteer and staff representatives from each parish, met numerous times. Cleveland Heights resident and Saint Ann parishioner Chris Larson served as chair. Team members visited each other’s parish campuses, attended each other’s services and examined the ministries, finances and facilities of the four churches. Parishoners from all four congregations were urged to visit their neighbor churches and to pray for the team.

Attendees at the Saint Ann meeting acknowledged the depth of data analysis performed by the team in order to pose five different scenarios and recommend the one deemed best for all.

The new one-parish entity would be headquartered at Saint Ann. The two priests serving the new worship community would operate from there and the existing Saint Ann elementary school would serve the entire cluster. None of the other three parishes currently has a school. While the scope and structure of planned changes were apparent, Larson acknowledged that many details remain to be worked out.

Over the next several months, the congregations will give their responses and input to the cluster planning team. The team must then submit their recommendation to the bishop in September of this year. By February 2009, the bishop will provide his response. If the cluster receives the go-ahead, implementation must occur by July 2010.

Carol Staiger was born and raised in Cleveland Heights, and returned there almost 10 years ago to make it her permanent home. Her paternal grandparents were among the first settlers of the area, and both of her parents grew up there as well. Carol is a marketing consultant who also enjoys staying connected to the local scene.